Shinsegae, which beat out a competing bid from rival retail group Lotte, will acquire 80% of the eBay unit’s outstanding shares through core group company Emart, according to an announcement Thursday.

“In the retail industry of the future, only those that are strong online will survive,” Shinsegae stressed in materials released with the announcement. “This deal buys us time and opportunities.”

The deal aims to tap South Korea’s 15 million eBay members to boost Shinsegae’s e-commerce business, but there is still some uncertainty about whether it will benefit the retail group enough to justify the hefty price tag.

Launched in 2000, eBay Korea logged 1.3 trillion won ($1.15 billion) in sales last year and an operating profit of 85 billion won. While it boasts an 11% share of South Korea’s online retail market, it has flagged recently amid competition from Naver and Coupang, which has been called “South Korea’s Amazon.”

Retail group Lotte and SK Telecom were among the suitors in the preliminary round of bidding in March. But only the Shinsegae and Lotte camps submitted actual bids before the June 7 deadline, and Lotte offered less than $3 billion, according to an executive at a company that participated in the process.

There was much behind-the-scenes maneuvering over the two-plus weeks it took to choose a buyer.

eBay had put its South Korean arm on the auction block with expectations of a purchase price around $5 billion — a figure that even top bidder Shinsegae failed to meet. The American company asked both Shinsegae and Lotte to sweeten their offers. When negotiations stalled, eBay decided to keep a 20% stake, rather than sell all outstanding shares as originally intended.

There was also uncertainty over the role of Naver, which has cross-shareholdings with Shinsegae group. Shinsegae had presented its offer as a joint bid with Naver, with the expectation that the internet company would bear some of the costs, but Naver ended up bowing out.

“If Naver, which competes with [eBay Korea] in online retail, got involved, the antitrust review would be more complicated,” a source familiar with the situation said. 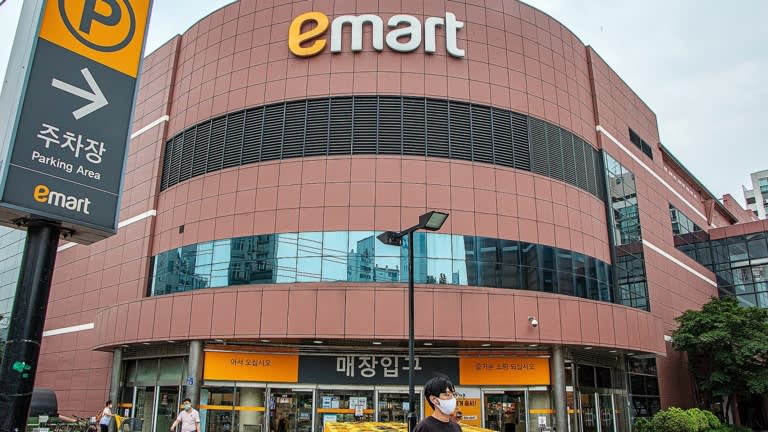 Emart, a core company in the Shinsegae group, operates brick-and-mortar hypermarkets along with its online mall. (Photo by Kotaro Hosokawa)

Shinsegae now sits in sixth place in South Korea’s online retail market, with a share of just 3%, according to Hanwha Investment & Securities. Adding eBay Korea, with its 11% share, would boost it to around the same level as No. 2 Coupang and not far behind market leader Naver itself, making for a clear three-horse race.

But Shinsegae’s Emart, which sells directly to consumers, and eBay Korea, which provides an online marketplace for sellers, have different business models that industry watchers say will take some time to integrate. Also of concern is the $3 billion purchase price, which equates to 40 years of operating profit for eBay Korea.

“Adding together their total members and turnover is pointless unless there are synergies,” a retail industry source said.

Shinsegae will not find it easy to radically reorient the e-commerce market, said South Korean brokerage Kiwoom Securities. The company will also face a tough challenge in impeding with Coupang’s sharp growth, according to a report released on Friday.

Amazon.com has not engaged in a full-scale entry into South Korea, in large part due to the scale of the market. Yet Coupang realized a 91% growth in revenue last year to $11.9 billion.

Coupang is capturing market share from both online and brick-and-mortar competitors through its Rocket Delivery service, which promises to bring orders to customers within 24 hours. That feat is achieved through Coupang’s nationwide network of fulfillment centers.

Rocket Delivery closely resembles Emart’s direct sales model, in which an outlet procures and stocks products ready for purchase. Coupang plans to use the funds raised on Wall Street to further expand its powerful distribution network. Just like Amazon in the U.S., a “Coupang effect” poses a threat to South Korea’s traditional retail industry.

Shinsegae’s portfolio contains 381 supermarkets and 5,323 convenience stores. The company was able to stay competitive with Lotte Group in the traditional retail game, but it has lagged in shifting to digital sales.

Last year’s operating profit at Emart was down 60% from 2014, at 240 billion won.The company’s sense that future profit growth is unlikely drove Shinsegae to purchase eBay Korea.

Whether Shinsegae’s gamble pays off remains to be seen. Lotte eventually decided to drop out of the bidding due to the overall price tag.

“After taking into account additional investments following the acquisition, we took a conservative approach,” said a Lotte source.