However, look deeper and you’ll see that the underlying motivation often varies.

For my 64-year-old-mother, Stella Okoroafor, becoming an entrepreneur was her only sensible choice.

As an older black woman and first-generation immigrant with a strong Nigerian accent, getting regular work paying above rock-bottom wages was difficult. So she tried to start a business instead. She failed many times over the 20 years when she repeatedly ran into discrimination, before she finally triumphed in her early fifties with a childcare business, which now has three branches across London and Kent.

Unfortunately, her success owed a lot to reasons not often talked about publicly — she hired young white women to be the face of it.

Despite having decades of start-up experience behind her, it took having white faces in positions of leadership as managers, because white customers mostly preferred to sign up for childcare with white leadership and would not trust black managers to look after their children.

Culture and race play a critical role in the future outcomes of black-owned businesses in the UK. 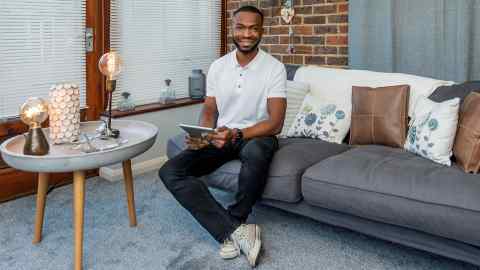 Everything from starting up, to raising capital and growing a business is influenced by the colour of one’s skin. “There is not a level playing field in entrepreneurship, whether for opportunities or outcomes,” says the British Business Bank in a 2020 report on entrepreneurship and diversity. “There is a systemic disadvantage for entrepreneurs from an ethnic minority background and who are female.”

When I decided to follow in my mum’s footsteps and launch my own business, I took advantage of a possibility that did not exist when she was starting out — I turned to the internet and set up an online business, in financial education.

As a former financial executive with a 14-year record, I felt I had plenty to offer. But I feared I might not be trusted as a black man teaching others how to manage their finances. Going online gave me an entry into an industry dominated by white men.

People found it reassuring to see that I was married with children. Also, participants seemed to appreciate that I spoke genuinely about my life story, as I’d often share information about my money mistakes such as buying an expensive car on finance years ago even though I lived payday to payday.

So far my experience in the three years of running my business has so far been much more positive than my mum’s.

Going online has been an equaliser. I’ve been able to gain visibility through my specialist content and reach global audiences without depending on traditionally white-dominated print and TV media for advertising, or having to partner with large white-led organisations.

I’ve had the chance to build a community, gradually develop trust with people from a wide range of cultures and demonstrate my expertise.

Lack of trust, often driven by a lack of understanding of different cultures, is one reason why black and other ethnic minority groups have historically suffered discrimination. According to government data, just 5.1 per cent of UK small and medium enterprises were led by people from a non-white ethnic minority in 2019. That’s a fraction of their share of the general population of England and Wales — 14 per cent.

In my experience, running a business online helps to bridge the trust gap, not least because operating online can offer anonymity to black and other ethnic minority entrepreneurs. Rather than being judged by the colour of our skin or our accent, we have the opportunity to be judged for our skills and the quality of our products or services.

Operating online doesn’t remove discrimination altogether or solve serious issues around access to funding for black entrepreneurs. But it removes some barriers to entry, reduces prejudice and creates the right conditions for the issues, such as funding, to be addressed over time.

In my own case, a successful start means I have increased my chances of raising growth capital later on. Together with my wife, Mary, and a small team, we’ve created digital products such as eBooks, online courses and a membership academy, that people trust and pay for, and opened up opportunities for us to work with large brand partners.

A similar approach was also taken by the founders of Afrocenchix, a London-based black hair care brand on a mission to make haircare simple using natural ingredients.

As two young black women, they felt they were not taken seriously when they tried for years to negotiate with buyers to secure shelf space for their products with major retailers. So they decided to explore a different sales channel — ecommerce.

Co-founders, Rachael Twumasi-Corson and Joycelyn Mate focused on telling their story online coupled with a word-of-mouth marketing strategy and over the years built a tight-knit community of customers. This strategy helped them to cut out the middleman and begin selling their products in large quantities direct to customers.

Their focus on ecommerce and building a data-led and customer-focused business, eventually won the attention of major retailers, including Superdrug and Wholefoods, and of financiers. Afrocenchix recently raised a £900,000 ($1.2m) seed round to support growth plans.

According to Twumasi-Corson, “If you go to retailers and they say, no, it is not the end of the journey. If you have spent time building a brand online, you have that brand capital that you can use to negotiate and get into stores with retailers”.

London-born William Adoasi founded Vitae London five years ago to produce quality watches at affordable prices — £150 and £300, with movements made in Japan and assembled in Hong Kong.

A Ghanaian by heritage, he thinks that being a black entrepreneur online with a focus on building credibility rather than seeking entitlement “removes barriers to industries like the watch or fashion industry where it would otherwise have been more difficult to get into”. Adoasi developed his business around his personal story and a commitment to put some of the profit towards educating children in Sub-Saharan Africa.

In addition to online sales, Vitae London now has its watches sold in 30 US stores through the huge Nordstrom chain and recently agreed to retail at Wolf and Badger in the UK.

Rodney Appiah, chair of Cornerstone Partners, an angel investing network for black and diverse UK founders, thinks that the internet opens the doors for black entrepreneurs. He says: “The ability to launch businesses with relatively little capital, which technology provides, naturally opens up the possibilities for people who would otherwise have limited access to capital, to access a global market. With ecommerce businesses, you can very much grow organically without paid ads, using a more community- or referral-led approach to your brand”

But, even with the internet, things are far from perfect.

Race bias that can creep into technology: for, example, face-recognition algorithms have been shown to perform differently on lighter faces than darker faces. Such biases embedded into technology can lead to problems when dealing with different groups of people.

Also, the rise of abusive “keyboard warriors” online means that black-owned brands can still be unfairly — and anonymously — targeted by people with racist views.

According to research by the Federation of Small Businesses (FSB), the economic contribution of ethnic minority businesses (EMBs) to the UK’s gross value added at £25bn per annum is important for the recovery programme.

The FSB says: “Business owners from an ethnic minority background are more likely to be growth-focused, innovative and export-oriented than other firms. These features — combined with the powerful social connections generated by EMBs in many localities — can help generate inclusive and creative strategies for economic recovery.”

This data could be used to support targeted regional campaigns to provide mentoring, professional support, start-up capital and training. Such a programme could begin in Greater London where there is a higher proportion of black entrepreneurs than elsewhere — often people on low incomes and living in deprived areas. Such an approach could then be broadened into a nationwide inclusivity plan for entrepreneurs from black communities and other disadvantaged minorities.

Ken Okoroafor is founder of The Humble Penny

5 reasons you should use Amazon Web Services for your business