A Home for the Holidays – Flagstaff Business & Online News 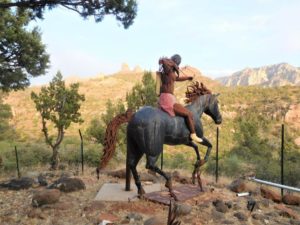 When then-California resident Jacquie Rerucha first saw “The Stetson Hat House” built in the middle of a two-acre gated lot perched high overlooking uptown Sedona, she fell in love. That was in 2005. It took her 10 years and the sale of a house in California to make that love her own, but when she did, she made it big-time.

She bought the house in 2015, and spent about a year on renovations and improvements, including roofing, electrical wiring, plumbing and air conditioning, to bring it to county and state code standards. She also replaced virtually all the older furniture.

The house had been custom-built in the 1950s and was showing its age.

“I spent a lot of money bringing the Stetson Hat House up to 21st century standards, but I saw the potential. It is a unique house, even in affluent Sedona. Located where it is, with uptown Sedona below, the colorful Village of Oak Creek rock formations to the south, and views of SR 89A corkscrewing up Oak Creek Canyon to Flagstaff to the north,” she said. “It is an absolutely gorgeous house for a holiday.”

Mystique of the Stetson House
One of the first things you’ll see when you walk through the oversized entry doorway is an antler hat rack on which are stacked several Stetson hats. Immediately above that, a cowboy saddle is tethered to a massive, peeled bark pine beam. The high ceiling slopes upward above a great room and dining room. Floor-to-ceiling windows draw your eyes outward to the multi-layered red rock formations for which Sedona is famous.

The rest of the house is equally enchanting. Walking down the hallway to some of the five bedrooms takes you past more hat racks with Stetsons. And no matter which bedroom you enter – either of two king-size or two queen-size; or the kids’ suite with bunk beds – your eyes are at once drawn to huge private windows framing Redwall limestone, the dominant rock formation that surrounds Sedona and the Village of Oak Creek. All bedrooms have their own television sets with remotes. The entire house is served by WiFi.

A large, fully-equipped country kitchen and pantry is adjacent to a formal dining room, with plenty of space for people to spread out. Two well-appointed full baths and one half-bath serve the spacious house. The laundry room is down a hall.

Outside, the roadway down from the private gate is wide and circles in front of the native sandstone-faced ranch-style house. There is plenty of parking, with a multi-car garage. On the other side, there is a firepit surrounded by comfortable seating and a dining area. There is also a large rooftop deck with 280-degree views. The terraced yard is tastefully landscaped and accented with unique statuary and handcrafted yard art.

The family for which the house is a namesake – John B. Stetson family—has its roots in Philadelphia. Stetson founded what ultimately became the world’s largest hat manufacturer, building its fame on the production of a high-crowned, wide-brimmed, soft felt hat that became synonymous with the American West, especially Arizona and cattle country.

That was 155 years ago, before there was a Sedona. Later, production shifted to a factory in St. Joseph, Missouri, until 1970, when the company shut its doors. Stetson hats are now manufactured in Garland, Texas, by Hatco, Inc.

Rerucha, who now lives in Prescott, spends a lot of time managing the Stetson Hat House and other properties she owns. She requires a three-day minimum stay for this home, which is occupied most of the year with guests from all over the world. “This is the most special of my properties.”

Property Manager Tyler Schweizer lives in Flagstaff and works for Vacasa, a rental management company with branches across North America. Rates vary, depending on the time of year. For more information, visit vacasa.com or take a virtual tour by Googling Stetson Hat House Sedona. FBN

IT and business services show signs of recovery